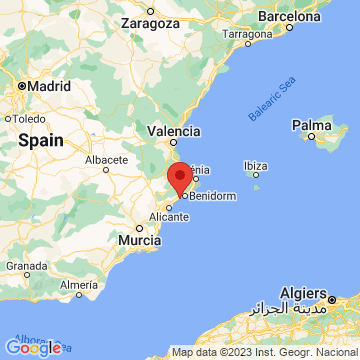 An interactive version of this map can be loaded by clicking on it. By doing so, data will be transferred between your browser and Google servers. The Privacy Policies of Google apply.

Our favorite destinations in the area

Guadalest with a tour of the Sierra de Aitana

Guadalest (valencian: El Castell de Guadalest ) is a small town in the province of Alicante in Spain, in the administrative area of Marina Baixa. The village is only about 30 km away from Villajoyosa and is situated on a hill above the valley of the Rio Guadalest.
When visiting by car you will have to pay a small fee for a guarded parking lot. Arrived at the top of the main square of the former fortress, you can enjoy a wonderful panoramic view over the mountains with the turquoise reservoir of the Rio Guadalest.

It is recommended to combine Guadalest with a tour of the Sierra de Aitana. If you like to hike, you are welcome to choose a hike e.g. at https://my.viewranger.com, which you can save with the app on your mobile phone.

The Algar Waterfalls, 28 km from Villajoyosa and 3 km from the center of Callosa d'en Sarrià in the direction of Bolulla, are a refreshing natural spectacle in the midst of a nature reserve. A sequence of smaller and larger waterfalls with natural pools along the Algar Canal ("cave" in Arabic) invite you to swim and cool off. In the crystal-clear turquoise shimmering water of the karst basin, a hot sunny day becomes bearable. The hit for kids is a natural diving tower!

For self-catering several picnic areas are indicated. Directly in the area of the pools it is forbidden to eat. Furthermore, there are numerous (rather overpriced) restaurants, which are located along the road to the entrance. Our tip: come in the morning or in the afternoon to escape the biggest crowds of tourists in the high season.

More information about current prices and opening times can be found at: http://www.lesfontsdelalgar.com/

Altea (22,000 inhabitants) is a municipality on the Costa Blanca in the southeast of Spain and also belongs to the province of Alicante. It is 21 km away from Villajoyosa and easily accessible by car. Altea is mainly known for its district Altea la Vella. Altea la Vella is about 3 kilometres north of the city center and recognized from far away because of its beautiful white houses. A walk through the small streets with many small boutiques and grocery stores, bars and restaurants is always nice. However, you have to expect many tourists in the high season.

If you feel like eating Italian food - especially pizza - we recommend the pizzeria El Castell in the old quarter. Carrer Salamanca, 14, 03590 Altea. Open daily from 12 o'clock, a weekend reservation in high season is recommended: www.elcastellaltea.com

Climb to the top of the Peñón de Ifach near Calpe

The Ifach has always been the landmark of the Costa Blanca. Already in antiquity times it served as a landmark for sailors. At its foot settled Iberians, Phoenicians, Romans and Byzantines.
With a total of 45 hectares the Parque Natural del Peñón de Ifach is one of the smallest in Europe. The fauna of the Ifach is unique: 300 species of animals, including 60 species of birds, have been observed here.
The higher you climb, the more breathtakingly the views become. The quite exhausting climb will be rewarded at the summit! Nowhere else in Europe are nature and man made so close together as at that point. On the one hand, the Mediterranean shines, herbs smell, seagulls are blaring. On the other, like a mirage, rise the towering skyscrapers of Calpe. The view extends tens of kilometres along the coast to Moraira and beyond. On a clear day, you should even see the Balearic island of Ibiza, which is 90 kilometres away! This has never been granted to us before…

If you are looking for a refreshment in the water after the effort, the small beach right on the harbour is highly recommended. Here you can swim in the crystal-clear water due to the white stone beach directly at the foot of the Ifach...

The Granadella bay is considered as one of the most beautiful beaches on the Costa Blanca. It is formed by two barrancos of the Granadella, which finds its way to the sea through forests covered with Aleppo pines. The beautiful bay is a nice starting point for snorkeling or diving. Because of the pebble beach, there is usually clear water here. You also find a small cafe and a local restaurant on site. In midsummer, however, the bay is very often overcrowded; therefore - if possible - rather schedule a visit in the off season.

The Cabo de la Nao, in Valencian Cap de la Nau (Cape of the Ship), is a distinctive cape on the Costa Blanca, which separates the bays of Alicante and Valencia. On the cape itself there is a distinctive white lighthouse over the cliffs. In the immediate vicinity you find the Restaurante Cabo de la Nao with a small terrace and fantastic views along the cliffs. From the small viewpoint next by you have a sensational view of the cliffs and the deep blue sea.

Alicante (330,000 inhabitants) is the nearest major port on the Costa Blanca in South eastern Spain and the capital of the province of the same name. The old town El Barrio de la Santa Cruz with its narrow streets and colourful houses, decorated with flags and flowers pots offers a lively nightlife. From here, a lift and a steep path lead to the medieval castle Castillo de Santa Barbara, located on a hill with impressive views over the Mediterranean coast.
It is certainly the best to visit the castle in the late afternoon / early evening, when the sun is lower to the horizon and everything appears in a warm tone - best light for photographs ;-). Or you just enjoy the sunset from up here!
During the summer months (July and August) the castle is open daily from 10am to midnight. From 10 am to 10 pm in April, May, June and September and from 10 am to 8 pm from October to the end of March.
For more information: http://www.castillodesantabarbara.com

The famous esplanade of Alicante, lined with palm trees and decorated with 6.5 million marble stones, also called the Explanada de España, is the evening meeting place of the residents of Alicante. It is the place for the typical Spanish paseo or for music open air concerts. From here, only by crossing the road, you are in 2 minutes at the beach of Alicante, Playa del Postiquet with its beautiful sandy beach.

Excursion to the island Tabarca

The island of Tabarca, only a few kilometres away, is administrated from Alicante. Once a hideout for pirates, today the island is visited especially during the high season on weekends by tourists.
By boat from the Alicante marina, the Kontiki ferry company can be reached on the island in about 1 hour, return journey costs 19 euros, children up to 4 years free:
Monday to Friday: Alicante - Tabarca: 11h | Tabarca - Alicante: 16: 30h
Saturday: Alicante - Tabarca: 11h and 13: 30h | Tabarca - Alicante: 17h
(As of November 2018)
Current information at: https://cruceroskontiki.com/en/